Different types of vacutainer and their uses

The evacuated tube system for blood collection in use for various laboratory tests consists of tubes of various sizes, with color coded tops indicating tube contents. Most blood collection tubes contain an additive that either accelerates clotting of the blood (clot activator) or prevents the blood from clotting (anticoagulant). 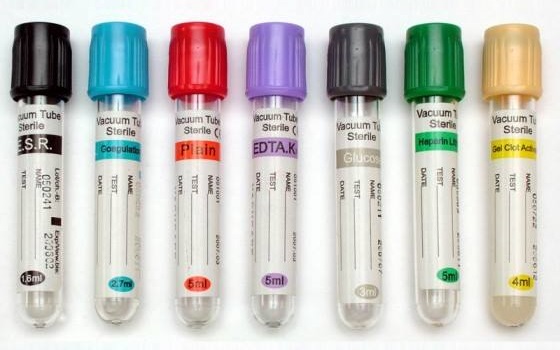 The list below lists the most commonly used blood collection tubes, their additives and uses in laboratory:

The red bottle is less common – it is used for biochemistry tests requiring serum which might be adversely affected by the separator gel used in the yellow bottle.

The blue bottle is used for haematology tests involving the clotting system, which require inactivated whole blood for analysis.

This less commonly used bottle is for biochemistry tests which require heparinised plasma or whole blood for analysis.

These bottles are generally used for haematology tests where whole blood is required for analysis.