A five-year-old boy who tested positive for ebola in Uganda has died, a health ministry official revealed on Wednesday, after a deadly outbreak spread from the Democratic Republic of Congo.
“The boy who tested positive for ebola in Kasese yesterday passed on last night in the isolation unit,” the official told AFP on condition of anonymity.
“The minister for health (Ruth Aceng) will be briefing the country about the death of the boy and arrangements to bury the body.”
The official said the child was likely to be buried on Wednesday. A five-year-old boy has died from ebola in Uganda in the first cross-border case of the flesh-eating virus since a deadly outbreak in neighbouring Congo last year. Picture: Ben Wise/International Rescue Committee via APSource:AP
hshshs 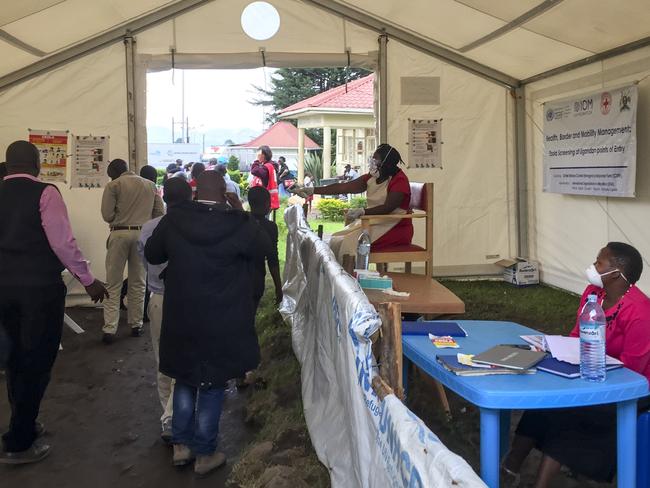 The virus can spread quickly via contact with bodily fluids of those infected and can be fatal in up to 90 per cent of cases. Picture: Ben Wise/International Rescue Committee via APSource:AP
The World Health Organisation confirmed on Tuesday that the boy, who was vomiting blood, was the first patient found to have ebola outside Congo since the outbreak began in August.
Uganda’s health ministry on Tuesday said that the mother of the child was a Congolese citizen married to a Ugandan. She had travelled with the child and four other family members back home to nurse her father who eventually died from the flesh-eating virus.

"The young patient - 5- year-old index case of #Ebola died last night. Two more samples were sent to UVRI and have tested positive. We, therefore, have three confirmed cases of #Ebola in #Uganda"- @JaneRuth_Aceng

WHO Uganda
✔@WHOUganda
@MinofHealthUG and the @WHO have confirmed a case of #Ebola Virus Disease outbreak in #Uganda. Although there have been numerous previous alerts, this is the first confirmed case in Uganda during the Ebola outbreak on-going in neighbouring Democratic Republic of the Congo. 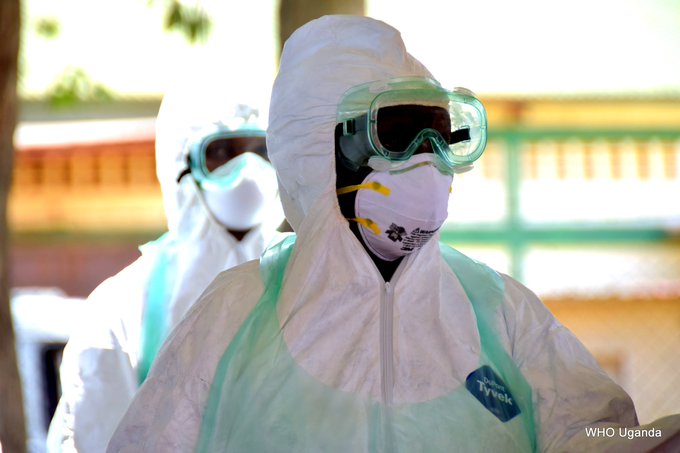 90 people are talking about this
Uganda has been on high alert since the outbreak across a porous border in the eastern DRC, where more than 2000 cases of the highly contagious virus have been recorded, two-thirds of which have been fatal.
Nearly 1400 people have died in what has become the second-deadliest ebola outbreak in history. Hospital staff and others are briefed on how to keep themselves safe at Bwera hospital, where the confirmed and suspected cases of ebola are being treated in Kasese District, western Uganda, near the border with Congo. Ben Wise/International Rescue Committee via AP)Source:AP An ebola-prevention information sign at the Ndaiga Health Centre II, near the shores of Lake Albert and the border with Congo, in Kagadi district, western Uganda. Picture: Ben Wise/International Rescue Committee via APSource:AP
Experts have long feared ebola could spread to neighbouring countries because of rebel attacks and community resistance hampering virus containment work in eastern Congo, one of the world’s most turbulent regions.
The virus can spread quickly via contact with bodily fluids of those infected and can be fatal in up to 90 per cent of cases.
Ugandan health teams “are not panicking,” Henry Mwebesa, a physician and the national director of health services, told The Associated Press on Wednesday. He cited the country’s experience battling previous outbreaks of ebola and other haemorrhagic fevers.
“We have all the contingencies to contain this case,” Mr Mwebesa said. “It is not going to go beyond” the patient’s family.
Two family members were being tested for ebola after developing symptoms, with results expected on Wednesday. The Congolese family are thought to have entered Uganda after bypassing official border points, where health workers screen all travellers for a high temperature and isolate those who show signs of illness.

Email ThisBlogThis!Share to TwitterShare to FacebookShare to Pinterest
Labels: NEWS