ARE YOU AWARE OF AFLATOXIN CONTAMINATION IN DIETARY STAPLE FOODS THAT YOU ARE CONSUMING? 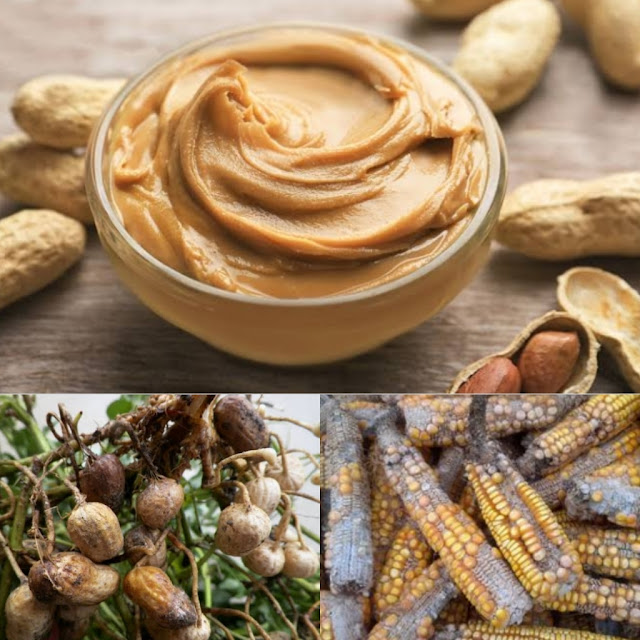 
Aflatoxins belong to a family of toxins produced by certain fungi.  The main fungi species that produce aflatoxins are aspergillus flavus and aspergillus parasiticus    that are found on agricultural crops such as groundnuts (peanuts), rice, maize (corn), soya beans, simsim (sesame) and cassava that are common global dietary staples. These aflatoxin producing fungi species are naturally abundant around the world and concentrated mainly in the human food supply in areas with wet and warm climates.
Aflatoxin contamination in dietary staples is a major global threat according to scientific research especially in dietary staples such as maize or corn since they are widely consumed.  Most of these nuts and whole grains tend to grow in humid climates that are likely to have aflatoxin contaminated soils   and the spread of aflatoxins in these crops can be hard to control because of the enormous quantities in which these crops are grown, the duration of storage and how often they are processed and later exported.
How are people exposed to aflatoxins?
Aflatoxin producing fungi can contaminate crops in the field, at harvest depending on the pre and post-harvest handling methods or practices and also during storage. People can be exposed to aflatoxins by;


What are the effects and health risks of aflatoxin exposure?
The most common aflatoxin strains most common in foods Include B1, B2, G1 and G2. After human consumption of contaminated foods, aflatoxin metabolic processes convert the strains into metabolites M1 and M2 which are potentially carcinogenic. International agency for research on cancer has classified aflatoxin B1 as highly carcinogenic and thus raises the risk of cancer such as liver cancer, viral hepatitis and also affects organs like the kidney. Aflatoxin seems to affect the different ways that cells reproduce and affect the liver too affecting the way other substances are metabolized and eliminated thus increasing food allergies.
Long term exposure can have serious health impacts that include; Inflammation that affects the heart, growth and development impairment and birth defects in children, autoimmune disease reactions.
Large doses of aflatoxins are rare but can lead to acute poisoning (aflatoxicosis) that can be life threatening usually through the damage of the liver. Outbreaks of acute liver failure          (jaundice , nausea and lethargy) identified as aflatoxicosis have been observed in human population since the 1960s and most recently reported during the summer in Tanzania. Adults are more tolerant to acute aflatoxin exposure than children. The consumption of food containing aflatoxin concentrations of 1mg ⁄ kg or higher has been suspected to cause aflatoxicosis.
Are aflatoxin levels regulated?
In many countries, regulations have been put in place to help limit exposure to aflatoxins by testing and properly harvesting and processing foods known to be contaminated. The World Health Organization and FDA has set maximum tolerable level of total aflatoxins in food s like corn in order to control the amount of exposure of people and livestock. According to The Official Journal Of The Society Of Toxicology, most nations have allowed a range of aflatoxin in corn an d peanuts between 4 to 20ng ⁄  g although this doesn’t do enough to protect everybody especially in under developed countries with poor to moderate living conditions and   their people consume these dietary staples in large quantities.
How can you minimize on aflatoxin exposure?
Mouldy foods are potentially contaminated with aflatoxins and therefore harmful when consumed.  The molds don’t just grow on the surface but penetrate deep into food and in order to reduce aflatoxin exposure, the consumer is advised to;
According to a 2015 study published in The International Journal of Food Microbiology found strong support for soaking, sprouting and fermenting grains, nuts and legumes due to how lactic acid and other beneficial types of bacteria wind up minimizing aflatoxin effects.