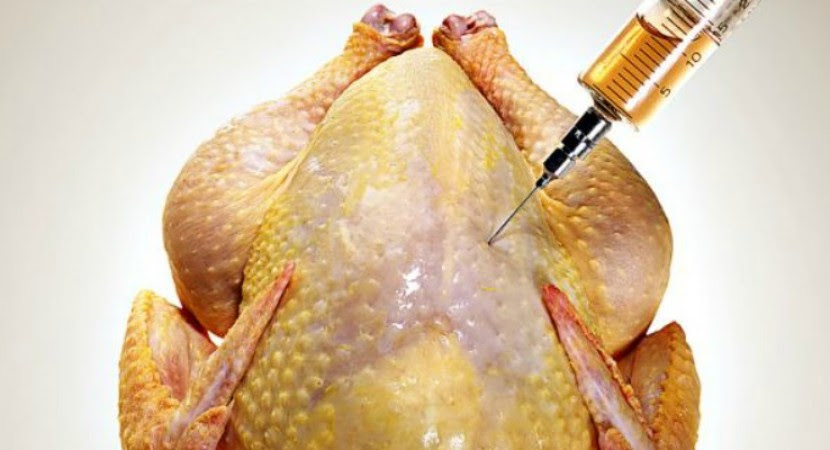 After years of rumors FDA finally admitted that the chicken meats around USA contain arsenic. Arsenic is a cancer causing chemical which if consumed in bigger doses could cost a life.  What most of you might wonder is from where this chemical comes.  The thing is that it is included in the chicken food on purpose. Back in 2006 the IATP`s report Playing Chicken: Avoid Arsenic in your meat showed that about 70% of the chicken in U.S are feed with arsenic. They are given this chemical in order to gain weight faster and the meat to get healthy color.

According to the Food and Drug administration about half of the chickens tested have absorbed inorganic arsenic in their liver. Out of this reason they demanded that Pfizer stops producing Roxarsone the arsenic-containing drug added to the chicken food to make them fat and to make the meat pink.

In the Wall Street Journal was stated: “The agency said its recently conducted study of 100 boiler chickens that detected inorganic arsenic at higher levels in the livers of chickens treated with 3-Nitro compared with untreated chickens… Pfizer said sale of 3-Nitro would be stopped by early July in order to allow animal producers to transition to other treatments.”

Although later the FDA said that the presence of the arsenic in the meat is so low that it can`t do any harm to you the arsenic is proved to increase the risk of cancer.

The arsenic is actually extremely toxic and can do much harm to the human health.  The University of South Carolina, Department of Environmental Health Sciences claims that arsenic together with mercury and lead cause neurological effects on the fetuses and small children. According to some researches arsenic is even 4 times more poisonous than mercury. The trivalent Arsenic As+ 3 is considered 60 times more toxic than the pentavalent As+ 5.

Another study published in the Journal of the American Medical Association came to realization that individuals that consumed big amounts of arsenic-tinged rice without being exposed on this chemical in some other way had significant cellular changes related to development of cancer.

Many other studies confirmed that this chemical can cause invasive squamous cell carcinoma, carcinoma of the skin, Bown disease and internal cancer of the lungs, the bladder, the liver and the kidneys.

The worst thing about all this is that FDA conceals this information from the public and tells the people that it is safe to consume this food.
at July 08, 2019