The causes and complications of menorrhagia and how to stop or treat heavy menstrual bleeding. 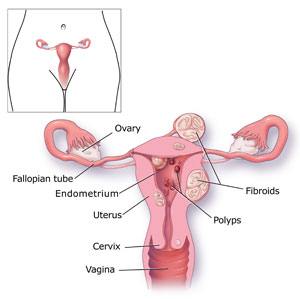 Menorrhagia, also known as prolonged bleeding or heavy menstrual periods, varies for each woman, so it may be difficult to tell what’s normal and what’s abnormal bleeding.

Signs and symptoms of menorrhagia may include:

In some cases, the cause of heavy menstrual bleeding is unknown, but a number of conditions may cause menorrhagia. Common causes include:

When to see a doctor

Seek medical help before your next scheduled exam if you experience:

The treatment depends on the cause; specific treatment is based on the number of factors which could include overall health and medical history, for instance, the capacity of a patient to tolerate some specific medication or therapies and most importantly, the patient’s preferences when it comes to child-bearing plans.
Some of the medication given includes; tranexamic acid; this helps to reduce excessive blood loss, oral contraceptives known as combined oral contraceptive pills, these help regulate menstrual cycles and reduce the episodes of prolonged and excessive bleeding.
Mirena intrauterine devices reduce the menstrual flow and cramping, if menorrhagia has caused anaemia, it is advised  that you take iron supplements.
Myomectomy can also be done; this is an operation to remove fibroids while preserving the uterus.
Hysteroscopic morcellation: A hysteroscope is inserted into the womb through the cervix and an instrument called a morcellator is used to cut or “shave” away small abnormalities, such as polyps.
Endometrial ablation: This destroys the womb lining with either laser, heat or ultrasound energy. It can be performed as a day case and usually takes just 15 minutes. Most women have no periods afterwards.
Uterine artery embolisation: This treats fibroids and involves inserting a small tube into the groin to block the blood vessels supplying blood to the fibroid.
Hysterectomy: A 100% effective procedure to remove the womb. It can be done vaginally, by keyhole surgery or by a surgical cut, which requires a hospital stay.
Other medications that can reduce on the bleeding, include, ibuprofen, non-steroid anti-inflammatory drugs (NSAIDs) such as  mefenamic acid  that reduces blood loss by around 20% while also alleviating pain., among other treatment.

Incorporating plenty of magnesium-rich foods into your diet. These include dark leafy veg, nuts, seeds, beans and wholegrains. Magnesium is excellent for heavy periods and it acts as a gentle muscle relaxant so it can help take the edge off very strong contractions of the uterus which can give rise to very heavy periods.

Risk factors vary with age and whether you have other medical conditions that may explain your menorrhagia. In a normal cycle, the release of an egg from the ovaries stimulates the body's production of progesterone, the female hormone most responsible for keeping periods regular. When no egg is released, insufficient progesterone can cause heavy menstrual bleeding.
Menorrhagia in adolescent girls is typically due to anovulation. Adolescent girls are especially prone to anovulatory cycles in the first year after their first menstrual period (menarche).
Menorrhagia in older reproductive-age women is typically due to uterine pathology, including fibroids, polyps and adenomyosis. However, other problems, such as uterine cancer, bleeding disorders, medication side effects and liver or kidney disease must be ruled out.

Excessive or prolonged menstrual bleeding can lead to other medical conditions, including:
GENETICS AND REPRODUCTION