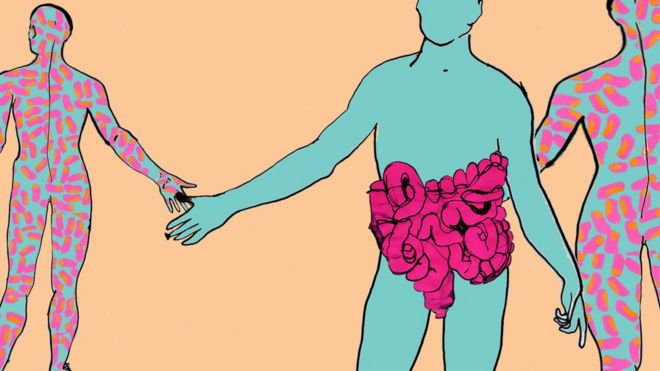 The faecal transplant, also known as trans-poo-sion, surely has the title of medicine's most disgusting procedure.
It is pretty much what you are imagining - part of a faecal stool is taken from one person and given to another.The purpose is to introduce new beneficial microbes to the receiving patient's digestive system.And it can be life-saving.It shows just how important microbes, which colonise nearly every surface of our body, are to our health.The gut is an exceptionally rich world with many different species of micro-organisms interacting with each other and our human tissue.Down in the dark, oxygen-deprived depths of your bowels is an ecosystem as rich as a rainforest or coral reef.But a bacterium called Clostridium difficile (C. difficile) can take over and dominate the bowels.
It is an opportunist and normally takes hold after patients have been treated with antibiotics.Antibiotic drugs are one of the miracles of the modern age, but they kill good and bad bacteria alike.They are like a forest fire burning through the gut's microbiome - the collected micro-organisms living down there - leaving behind a scorched microbial earth on which C. difficile flourishes.

The problem with C. difficile is that patients will have multiple bouts of watery and even bloody diarrhoea every day, tummy cramps, fever and in the most severe cases the infection is fatal.
The best that medicine has to offer is more antibiotics; it is the definition of a vicious circle.A stool transplant - or to give it its full title "a faecal microbiota transplant" - aims to repopulate the patient's gut with the microbes from a healthy person.A relative is often used as they would have had similar gut bacteria.After a "sample" is produced, it is mixed with water.Some techniques break the poo up by hand while others blitz it in a household blender.There are two routes for getting the sample into the required location - down through the mouth or up through the rectum.

Listen to The Second Genome on BBC Radio 4.
The next episode airs 11:00 BST Tuesday April 24, repeated 21:00 BST Monday April 30 and on the BBC iPlayer

Dr Janet Jansson, a microbial ecologist from Pacific Northwest National Laboratory in Washington State in the US, was part of the team trying to prove trans-poo-sion works.The patient was a 61-year-old woman who had had chronic diarrhoea for around eight months and had lost 27kg in weight."It was really a desperate plea for some kind of solution, she was at risk of dying from this C. difficile infection, all of the antibiotics were ineffective," said Dr Jansson.
A sample of healthy stool was transplanted from her husband.Dr Jansson told the BBC she was very surprised at its success."Amazingly two days after that she was able to have normal stools, normal bowel movements, she was basically cured," she said."As a microbial ecologist, this is very unusual."We saw she went from a very diseased state, when you look at the microbial species, to a healthy microbiome that was very similar to her husband's," Dr Jansson added.

Trials have suggested the procedure is around 90% effective.
The excitement in the field has led to some people even performing their own DIY faecal transplants with groups like OpenBiome in the US - essentially a public stool bank - being set up.But will trans-poo-sions mean anything for medicine beyond C. difficile?
The interaction between our human and microbial selves is being investigated in nearly every disease you can think of the microbiome has been linked to diseases including inflammatory bowel disease, diabetes, Parkinson's, whether cancer drugs work and even depression and autism.But this means there could be unintended consequences of a faecal transplant.
There was a report in 2015 of a woman gaining 36lb (16kg) and being classed as obese after a transplant from her daughter.It is possible to make mice thinner or fatter by transplanting into them the microbiome from either a lean or obese human, although the jury is still out on whether the same rules apply in people.

There is also the more obvious risk of transferring dangerous disease-causing microbes.It is why scientists are trying to move on from donating faeces to donating cocktails of bacteria.Dr Trevor Lawley, from the Wellcome Sanger Institute, said future treatments had to be more refined and targeted ,"Faeces is an undefined community, and when you develop a drug first and foremost you have to consider the safety of the patient," he said.
"We have an idea of what bugs to put in now, so if you have a defined mixture that's proven safe, we can overcome that." And that is likely to be the future of microbial medicine - knowing what is the problem in an individual patient's microbiome and being able to address that.
post your comment about this procedure
MICROBIOLOGY NEW TECHNOLOGY NEWS