Why Trump should safe-quarantine as agency’s coronavirus guidelines says 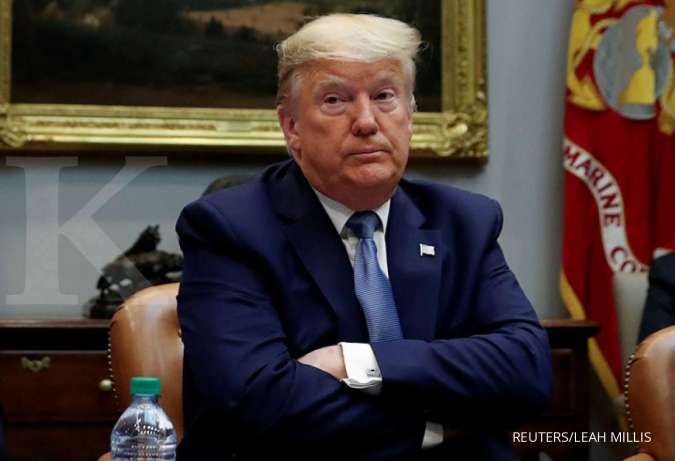 If President Donald Trump listened to his own administration’s advice, he would self-quarantine to curb the spread of Covid-19. Instead, experts say he’s putting others and himself at risk by continuing to work normally despite having been exposed to the novel coronavirus.
A self-quarantine, according to the Centers for Disease Control and Prevention (CDC), is “The separation of a person or group of people reasonably believed to have been exposed to a communicable disease but not yet symptomatic, from others who have not been so exposed, to prevent the possible spread of the communicable disease.” It’s proven to be one of the most effective methods of stopping a larger outbreak.
YOU MAY ALSO LIKE:Is corona virus (COVID19) related with Chinese 5G? Is it accidental leaked Chinese bio weapon? is it worse than black death?
The fact that Trump isn’t doing this — or that his staff isn’t making him do it — is a very serious concern. “He should be” self-quarantined says Tara Smith, an expert on infectious diseases at Kent State University.
That’s because the president may actually have been exposed to the virus: Last Saturday, Trump met with a top Brazilian official at Mar-a-Lago who has since tested positive for Covid-19.
An image posted by the official, Fabio Wajngarten, quickly circulated on social media. It showed Trump standing right next to Wajngarten and holding a “Make Brazil Great Again” hat that the official had presumably handed to him. “The direct contact with the group from Brazil is very concerning,” says Smith.

The guy standing to Trump’s left just tested positive for coronavirus, according to Brazilian media. Fabio Wajngarten posted this photo, taken during meetings at Mar-a-Lago, five days ago. 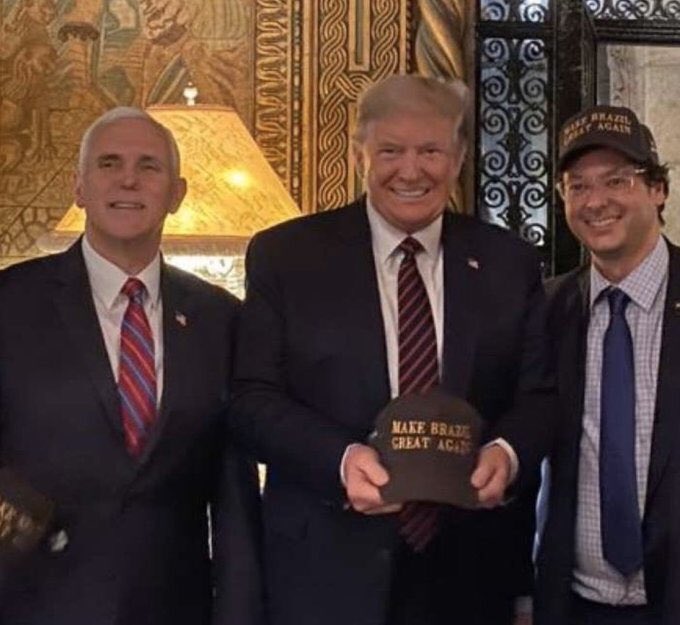 7,388 people are talking about this
The White House, though, isn’t worried.
In a Thursday statement, press secretary Stephanie Grisham said that “Exposures from the case are being assessed” but that Trump and Vice President Mike Pence, who was also in the photo, “had almost no interactions with the individual who tested positive and do not require being tested at this time.”

Replying to @W7VOA
Statement from @PressSec. 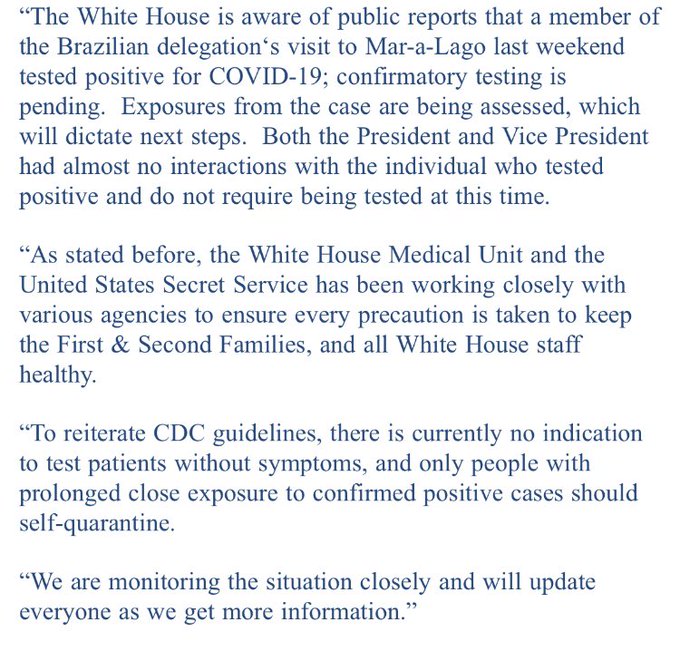 15 people are talking about this
Per the CDC definition above, though, it’s reasonable to assume Trump could have been exposed to the virus during that interaction. While Trump may not be showing symptoms, it’s not impossible to think he’s carrying the disease and risks exposing others to it.
But two senators who met with Brazilian President Jair Bolsonaro aren’t taking any chances.
Sen. Rick Scott (R-FL) was in the same room as Wajngarten during a Miami meeting with Bolsonaro, and has therefore chosen to self-quarantine even though his doctor told him he was a low risk. Sen. Lindsey Graham (R-SC) is following similar counsel: “In an abundance of caution and upon the advice of his doctor, Senator Graham has decided to self-quarantine awaiting the results of a coronavirus test,” reads a Thursday statement from his office.
YOU MAY ALSO READ:Truth about susceptibility of children to Corona virus(COVID19)
But that’s not all.
In the last week, Trump has had direct contact with two Republican Congress members just before they self-quarantined due to their exposure to coronavirus. Those politicians, Rep. Doug Collins (R-GA) and Rep. Matt Gaetz (R-FL), had been in contact with someone who tested positive during the 2020 Conservative Political Action Conference. Trump also spoke at the event, but it’s unclear if he came into direct contact with the person who tested positive.

Further, Trump has been on the campaign trail where he’s been shaking hands and taking photos with supporters.
Health professionals I spoke to earlier this week said that Trump, along with the leading Democratic presidential candidates, should stop doing that to minimize the candidates’ risk of exposure to the virus. “That’s really hard because that contact is fundamental for interacting with potential voters,” Ashish Jha, director of the Harvard Global Health Institute, told me.
It’s especially important for Trump because he’s in his 70s. The CDC notes that older adults are “at higher risk of getting very sick” from Covid-19 than the general population is. As such, the CDC advises that older people should “stay at home as much as possible” to avoid contracting the virus.
Other than a few canceled rallies, though, Trump has given no indication he plans to lie low for a while for his own safety and the safety of others. He may not want to do so because it could make him look weak or because it could make some in the country panic, both reasonable concerns during a crisis.
But the advice from medical professionals is pretty clear: Trump should probably self-quarantine to see if he shows signs of symptoms. Hopefully, he doesn’t and can continue being president as normal. If he does self-quarantine, though, he will have not only curbed a greater outbreak but set a good example for everyone else.
“This is a chance for him to show leadership and set an example for the rest of the country to follow, especially for those who have listened to him previously use the word ‘hoax’ in reference to coronavirus,” Kent State’s Smith told me.
That, in the time of the coronavirus, could potentially be a life-saving act.
CORONA VIRUS FAMOUS PEOPLE NEWS