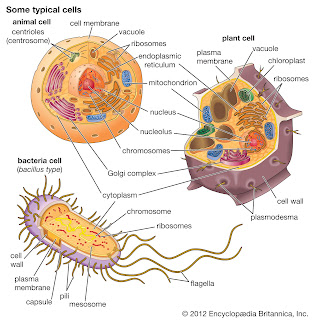 Bacteria are prokaryotic, unicellular microorganisms, which lack chlorophyll pigments. The cell structure is simpler than that of other organisms as there is no nucleus or membrane-bound organelles.

Due to the presence of a rigid cell wall, bacteria maintain a definite shape, though they vary in shape, size, and structure. 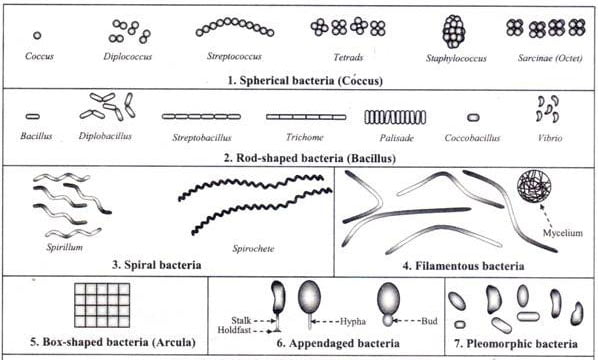 When viewed under a light microscope, most bacteria appear in variations of three major shapes: the rod (bacillus), the sphere (coccus), and the spiral type (vibrio). In fact, the structure of bacteria has two aspects, arrangement, and shape. So far as the arrangement is concerned, it may Paired (Diplo), Grape-like clusters (staphylo), or Chains (strepto). In shape, they may principally be Rods (bacilli), Spheres (cocci), and Spirals (spirillum). 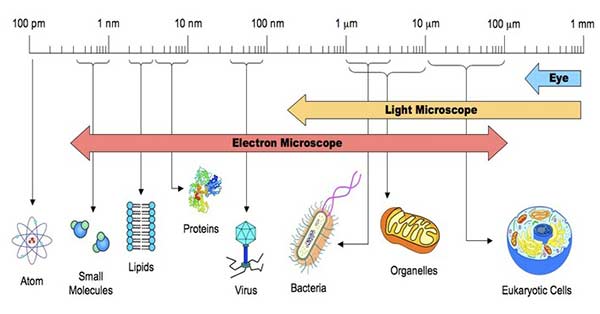 Thus a few bacteria are much larger than the average eukaryotic cell (typical plant and animal cells are around 10 to 50 µm in diameter).

The shape of Bacterial Cell

Cocci bacteria can exist singly, in pairs (as diplococci ), in groups of four (as tetrads ), in chains (as streptococci ), in clusters (as stapylococci ), or in cubes consisting of eight cells (as sarcinae). Cocci may be oval, elongated, or flattened on one side. Cocci may remain attached after cell division. These group characteristics are often used to help identify certain cocci.

The cocci are arranged in pairs. 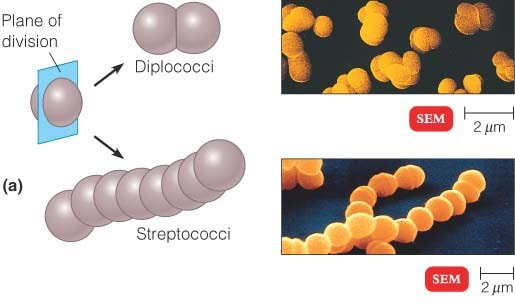 The cocci are arranged in chains, as the cells divide in one plane.

The cocci are arranged in packets of four cells, as the cells divide in two plains.

The cocci are arranged in a cuboidal manner, as the cells are formed by regular cell divisions in three planes. Cocci that divide into three planes and remain in groups cube-like groups of eight.

The cocci are arranged in grape-like clusters formed by irregular cell divisions in three plains.

The cylindrical or rod-shaped bacteria are called ‘bacillus’ (plural: bacilli).

The bacilli are arranged in chains, as the cells divide in one plane.

These are so short and stumpy that they appear ovoid. They look like coccus and bacillus.

The bacilli bend at the points of the division following the cell divisions, resulting in a palisade arrangement resembling a picket fence and angular patterns that look like Chinese letters.

Spirilla (or spirillum for a single cell) are curved bacteria which can range from a gently curved shape to a corkscrew-like spiral. Many spirilla are rigid and capable of movement. A special group of spirilla known as spirochetes are long, slender, and flexible.

They are comma-shaped bacteria with less than one complete turn or twist in the cell.

They have rigid spiral structure. Spirillum with many turns can superficially resemble spirochetes. They do not have outer sheath and endoflagella, but have typical bacterial flagella.

Spirochetes have a helical shape and flexible bodies. Spirochetes move by means of axial filaments, which look like flagella contained beneath a flexible external sheath but lack typical bacterial flagella.

Others Shapes and Arrangements of Bacteria 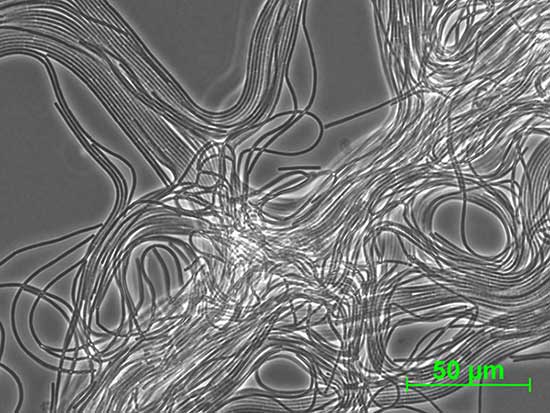 They are very long thin filament-shaped bacteria. Some of them form branching filaments resulting in a network of filaments called ‘mycelium’. 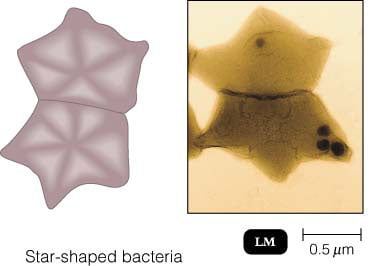 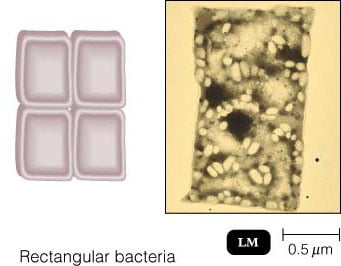 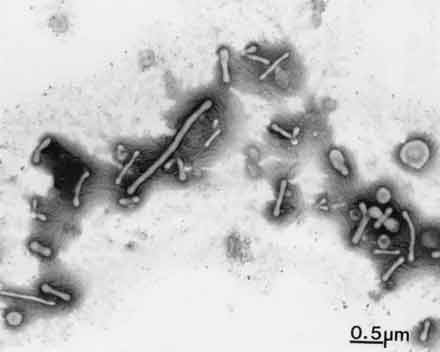 These bacteria do not have any characteristic shape unlike all others described above. They can change their shape. In pure cultures, they can be observed to have different shapes.