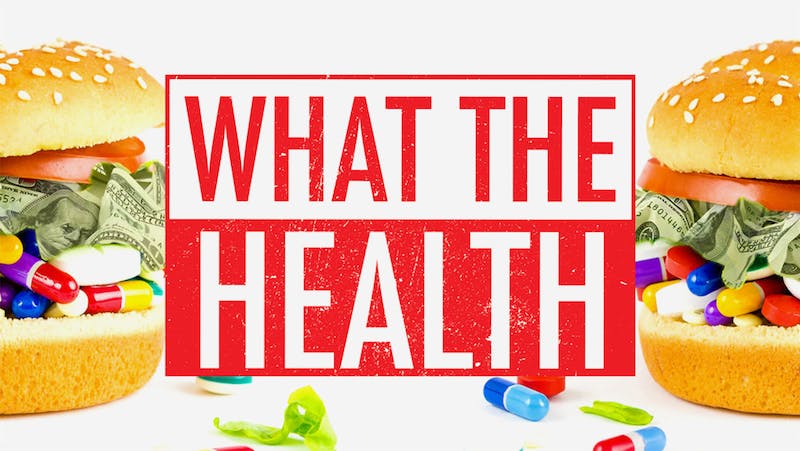 Health claims fly on social media and rack up thousands of likes and shares
From vagina-sweetening pills to eating grapefruit to prevent heart disease, 2019 had its fair share of outrageous health claims. Ian Marber, a London-based nutritional therapist, has amassed thousands of fans for debunking several of them on his Twitter page.
Now, in a piece for MailOnline, Mr Marber has revealed 16 of the strangest claims he came across over the course of the year. And it's bad news if you believed full moon water could boost your energy, or weight loss can be aided by drinking eggplant juice.
Mr Marber told MailOnline: 'Social media has given everyone a voice and there are a handful of people who make dramatic claims. There is a darker side to misleading claims and advice as believing it my dissuade people from taking action when facing disease. Or it could encourage people to believe in cures that are no more than false advertising.'
Supplements to improve the taste of your vagina
Vagina sweetening pills caused an uproar when they made headlines around two years ago. But the bogus products continue to be flogged on social media, accompanied by some interesting sale techniques. They claim to make a woman 'taste better than ever' with a 'semi fruity taste' which will keep their partner from straying.
Mr Marber said: 'A product that claims to improve the flavour of secretions may seem funny, but it suggests that unless we do so we are flawed and unpalatable.' 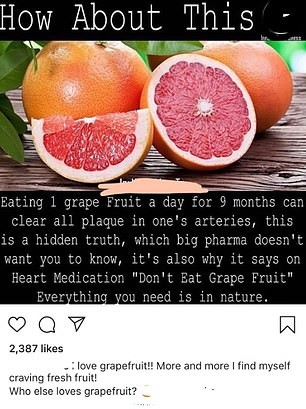 Grapefruit will reduce the risk of heart disease... According to an Instagram post which amassed almost 2,400 likes, eating a grapefruit a day for nine months will clear plaque in your arteries. The author warned their followers 'big pharma' – large drug giants – are hiding the power of grapefruit and telling their patients to avoid it completely.
Mr Marber, who is also an author of 12 nutrition books, said: 'Grapefruit or any food can't clear plaque, that’s daft.
'And the claim "big pharma" knows this is manipulating the truth and encourages unwelcome distrust between patients and the medical community.'
Tea will get rid of hernias
A hernia is a bulge on the body which occurs when internal tissues break through a weakness in the surrounding tissue wall. Most commonly this happens on the stomach. Surgery may be necessary to fix the problem, or the patient may be put on 'watch and wait' to monitor their symptoms.
Mr Marber - who posted a picture of the hernia removal tea - said there is no possibility tea will be useful for the treatment of a hernia.
He said: 'Of course a tea can't remove a hernia, this requires medical attention and delaying getting it by hoping that a tea can work could have long term consequences as an untreated hernia can cause pain and inflammation.'
Mr Marber said: 'Eating a single food won’t offer protection against cancer, especially in random arbitrary amounts'

READ ABOUT:Vaginal fluid transplants to be available in US
Eat five almonds a day to avoid cancer
Almonds contain antioxidants, vitamin E, fat and fibre. Because of this, snacking on them can boost your health. But one Instagram post goes a step too far, suggesting five singular almonds every day will prevent cancer.
Mr Marber said: 'Almonds have many benefits but eating a single food won’t offer protection against cancer, especially in random arbitrary amounts.'
Eating apples at night is bad

An apple a day keeps the doctor away - or so they say. But one Instagram post, liked by more than 28,000, suggested it's the 'worst idea' to eat the fruit at night.  It did not explain why, but urged people to share the piece of information with family and friends.
Mr Marber rubbished the claim and said: 'The best time to eat an apple is when you want to.
'Its properties don’t change according to the time of day and suggesting otherwise implies some danger of eating one at night, which is plain silly.'
Calories have nothing to do with weight
If only it were true that you could eat as many calories as you wanted and still lose weight - as suggested by a Twitter user this year. Mr Marber saved the 'confusing' tweet which said: 'Calories have nothing to do with weight gain or weight loss. I could feed you a 10,000 calorie diet and you would still lose weight.'
People need different amounts of calories a day depending on a range of factors, such as their age and size. However, the NHS states that to lose weight, you need to reduce your energy intake.
Mr Marber agrees: 'Calories in and calories out is the basis of weight changes.
'Whoever wrote this clearly really has no clue about how the body works and could confuse readers. Don’t expect to eat 10,000 calories and lose weight.'
Full moon water will give you energy
Free thinkers may find solace in practising 'mind, body and spirit'. They may also be disappointed and out of pocket if they buy 'full moon water' that promises to recharge their energy.  It's not clear how much the anonymised product is sold for, but it's unlikely to have cost much in production.
Mr Marber posted an image of the product on his Twitter and slammed the false hope given to consumers.
He said: 'Water isn’t "charged" with anything, let alone anything that results from the movements of the moon.
'Once again, implying a benefit to charge for a product that simply isn’t possible.'
READ ABOUT:Amenorrhea (female infertility well explained)
Cancer can be killed by cutting out sugar alone
Sugar has been indirectly linked to cancer in various studies. But to say it directly feeds cancer tumours is 'a myth', Mr Marber said. One post claimed cutting out refined white sugar could 'starve cancer', presumably directed at cancer patients who need real medical care.
Mr Marber said: 'There’s a long standing myth that sugar feeds cancer, and this post suggests that removing one ingredient will starve cancer.
'In addition, suggesting that alkaline alternatives are different is a quackery.
'Such posts often claim to tell the "truth" about disease, which suggests that everyone in the medical profession is withholding truth, like some gigantic cover up, yet this one person knows more than specialists dedicated to helping others.'
Foods can be measured in angstroms
Angstroms are a scientific way of measuring extremely small distances. Why they have been linked to the measurement of food or 'body frequency' in one Instagram post is unclear. The meme provided a detailed graphic about how various foods contain energy in 'angstroms'.
Even more baffling is where the numbers are plucked from, claiming fresh fruit contains up to 10,000 angstroms, while meat contains zero.
Mr Marber said: 'Angstroms are units of length used to measure minuscule distances and have nothing to do with energy or cancer.
'Suggesting that one group of foods have different levels and associating that with cancer is ridiculous.'
Cow's milk is the most important carcinogen - and that's the truth
Milk from cows is the 'most relevant carcinogen ever identified', according to an online article which delved into the beliefs of a scientist. The accompanying Instagram post says removing casein in milk can 'turn off cancer', and that medics pay no attention to such information.
Mr Marber said: 'Suggesting that any one element, including casein, turns cancer on or off is very misleading.
'The copy says that people in the "cancer community have paid almost no attention to nutrition", which isn't true, and also promotes the idea that this one person knows the "startling" truth, whilst oncologists don’t.
'Furthermore it pays no heed to potential value of dairy as a useful source of easily absorbed calcium.'

READ ABOUT: One of the greatest life threatening diseases ( BRUCELLOSIS) in Uganda today
Muscles are made of plants
A popular Instagram post this year aimed to shock followers with the 'mind-blowing' fact that muscles are 'made of fruit and plants'. It got 4,748 likes, and while the author has not been identified, it may be assumed that they are encouraging a plant-based diet.
Mr Marber: 'All muscle is made of amino acids, which are found in proteins, be they from animals or vegetables. Using this childish simplistic logic confuses people.'
Eggplant juice aids weight loss
Blended eggplant is one of the most 'powerful weapon' against weight loss, an Instagram post claimed. Mixing eggplant, also known as aubergine, with just water and a squeeze of lemon, is claimed to 'burn fat at all times' and help you drop weight drastically.
Mr Marber said: 'One of the most powerful weapons against excess weight is learning and adopting new habits.
'These don’t include drinking an unpalatable concoction that has supposed magical properties.'
Drinking cold water causes fat gain
Water is a necessity to life that sadly millions don't have proper access to. But among those that do, some are choosy about what type they prefer. A blog post by an active wear company dug up by Mr Marber this year advised only drinking warm water to aid digestion.
The author told people that 'drinking cold water during or after a meal can harden the oil in consumed foods and therefore create a fat deposit in the intestine'.
Mr Marber said: 'Food and drink quickly adopts the temperature of the body as it is ingested, and cold water doesn’t harden fat and deposit in the intestines. This post has an agenda and uses quasi-science to further it.'
Foods linger in the body for months
A list of foods and drinks - arguably some of the most enjoyable - were slammed for preventing the body from 'healing' in a social media post this year. The post said gluten lingers in the body for four months, sugar for two weeks, alcohol for eight days and dairy for three weeks. Therefore, if you want to be 'healed', you must be strict with removing it from your diet.
Mr Marber, who posted the meme on his Twitter, said: 'The timings claimed in this are ridiculous and also suggests that the elements cited, such as gluten, coffee and dairy, have to be removed or else it's our own fault if our "healing journey" is unsuccessful.'
Gluten causes life-threatening conditions

Some people have an intolerance to gluten, called coeliac disease. Gluten, a protein in bread, cakes and cereals, irritates their intestines, causing diarrhoea, abdominal pain and bloating. A post on social media this year made bold claims that a gluten can cause bone loss, brain damage and psychological disorders.
What angered Mr Marber was the way the post was written in order to spread fear of gluten in pregnant women.
He said: 'It's an old trick, starting off a post with a controversial claim but suggesting that it's widely known. Citing recent studies without naming them is another one.
'But this post even suggests that eating gluten damages your unborn child, which could lead to anxiety and guilt in mothers, yet is unfounded.'
Every sickness is caused by a mineral deficiency
Every disease can be traced back to one mineral deficiency, according to an Instagram post with 875 likes. It suggests that by fixing any deficiencies, diseases can be cured.

READ ABOUT:Health benefits of Phosphorus
Mr Marber said: 'Disease has many roots and mineral deficiency, if it were true, is the very unlikely reason.
'This implies that there is fault to be found and that you can fix disease with a mineral.'
Which one of the claims have u encountered? , lets hear your comment below
at January 04, 2020